Most sustainable ways of getting to the Lake District

In collaboration with our partner Campaign for National Parks, we’re advocating for more to be done to enable everyone to access the National Parks sustainably. Although a quarter of households do not own a private car, 83% of visitors travel to the parks by car. To combat this, we’ve provided information on sustainable travel options, starting with the Lake District, to open up the park to new visitors and reduce environmental damage.

As one of the UK’s most popular beauty spots, getting to the Lake District should be on everyone’s bucket list. A paradise for nature lovers, this national park’s stunning landscape has long been a favourite with romantics and poets alike. However, the fabled beauty of this area is also, somewhat ironically, looking likely to be the cause of its destruction.

With 19 million visitors every year, the carbon footprint of the visitors travelling to the park is staggering. The majority of tourists reach the area by car – a mode of transport which is damaging the planet in a variety of ways. However, this definitely isn’t the only way to reach the Lake District.

Located in the north-west of England, the park is connected to the rest of the country by a network of train, bus and coach routes. Meaning that you can leave the car at home for the duration of your trip, thus reducing your carbon footprint and helping to protect the beautiful natural scenery which you’re travelling all this way to see.

Ways to get to the Lake District 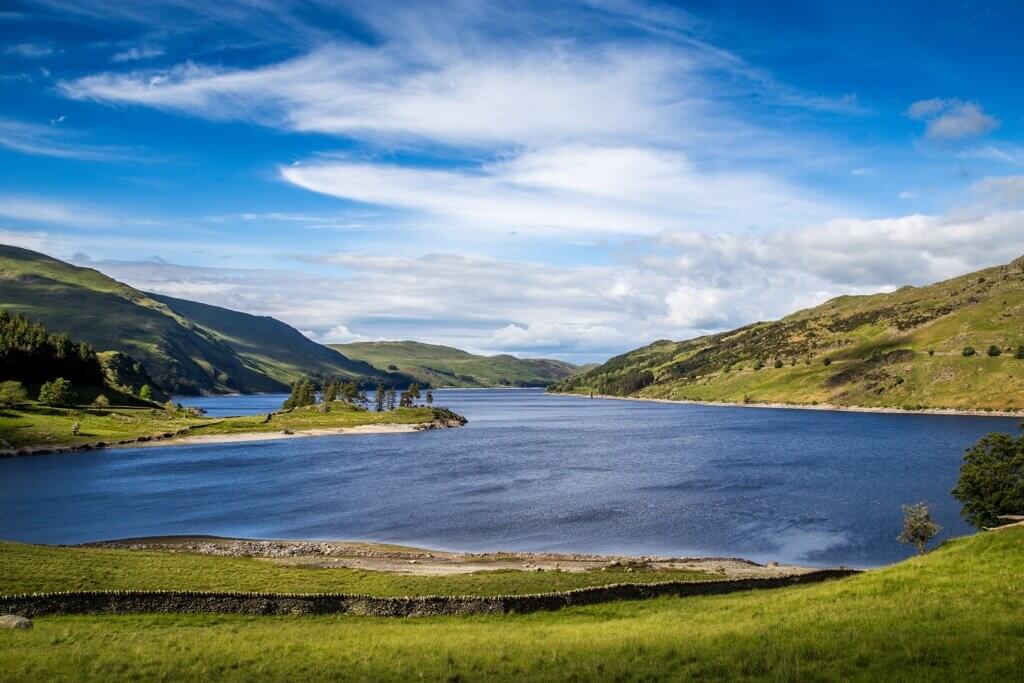 Set upon the extensive West Coast mainline, which runs from London all the way up to Glasgow and Edinburgh, there’s plenty of routes available if you’re travelling to the Lake District by train. A direct service runs from Manchester to Windermere and local trains call at Staveley and Kendal.

If you’re coming by coach, then National Express runs services between the Lake District and cities like London and Manchester. Once you’re there, Stagecoach buses operate throughout the region, allowing you to explore further off the beaten track. For overseas visitors, there are direct bus and train services which run from Manchester airport straight to the Lake District.

Distance from London to the Lake District

Set in the north-west of England, the Lake District is just 244 miles from London and is easily accessible by public transport. The journey takes around 3 hours by train, or 9 hours by bus, and, once you arrive, you’ll find plenty of local transport services to get around with. 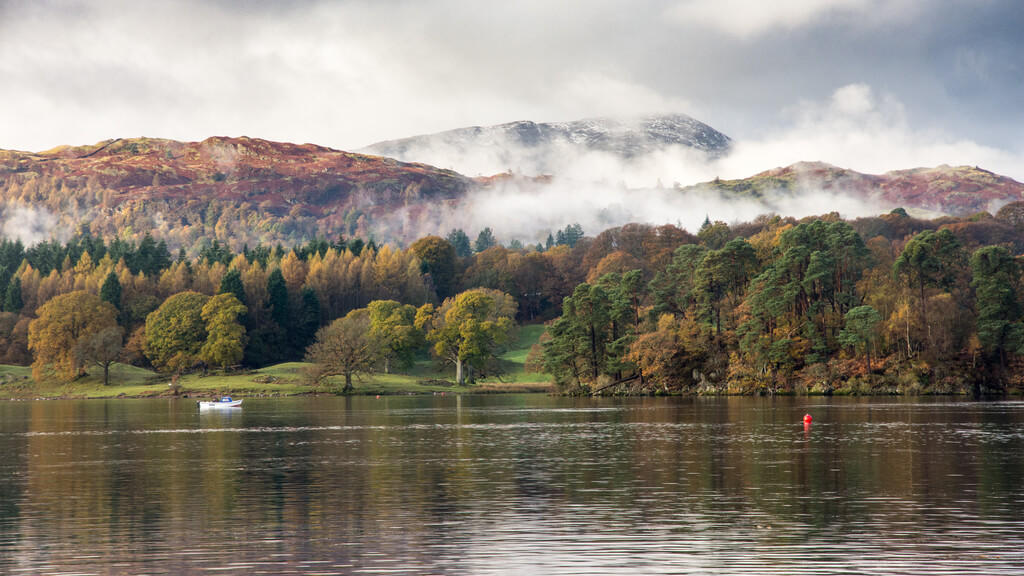 London to the Lake District by train

Getting to the Lake District from London by train couldn’t be easier. Trains run from Euston directly to Oxenholme, Penrith and Carlisle and take between 3-4 hours, depending on which station you choose. Oxenholme is near the lively market town of Kendal, which, as well as being home of the famous mint cake, is very well connected to the rest of the park by buses.

London to the Lake District by bus

London to the Lake District by bus is a little more of a slog, but definitely not an impossible feat. There’s actually a direct National Express coach service which runs from Victoria Coach Station straight to Windermere. At eight and a half hours, this does take much longer than the train. However, it reduces the need for changing to a public service at Oxenholme, Penrith or Carlisle, as you’ll be travelling straight to one of the regions biggest attractions: Lake Windermere.

Cheapest ways to get to the Lake District

As with most journeys, the one which takes the longest is usually the cheapest option. So, in this case, the coach trip is a fraction of the price of the train. However, the cost of the train can be reduced by investing in a railcard and booking well in advance.

Train stations in and around the Lake District

Train stations in the Lake District

There are plenty of options when it comes to train stations in and around the Lake District. The nearest mainline train station to the Lake District National Park is Oxenholme Rail Station, which serves as a great option if you’re looking to explore Kendal and the surrounding area. However, depending on which part of the Lake District you wish to visit, you can also get trains to Windermere, Carlisle, Barrow and Penrith.

Best station to get to the Lake District from London

Direct services from London to Oxenholme, Penrith and Carlisle run frequently throughout the day. Oxenholme is located closest to the Lake District National Park; however, if you’re travelling to the north side of the park then Penrith or Carlisle would be the best option.

Getting around the Lake District by public transport

Once you’ve arrived in the Lake District, you’ll find plenty of ways to get around. Stagecoach operates an extensive network of bus routes throughout the area – its open top buses are especially popular with tourists and day tickets start from as little as £8.50. All the bus timetables for the county of Cumbria can be found here and a map of the area’s bus routes can be seen below. 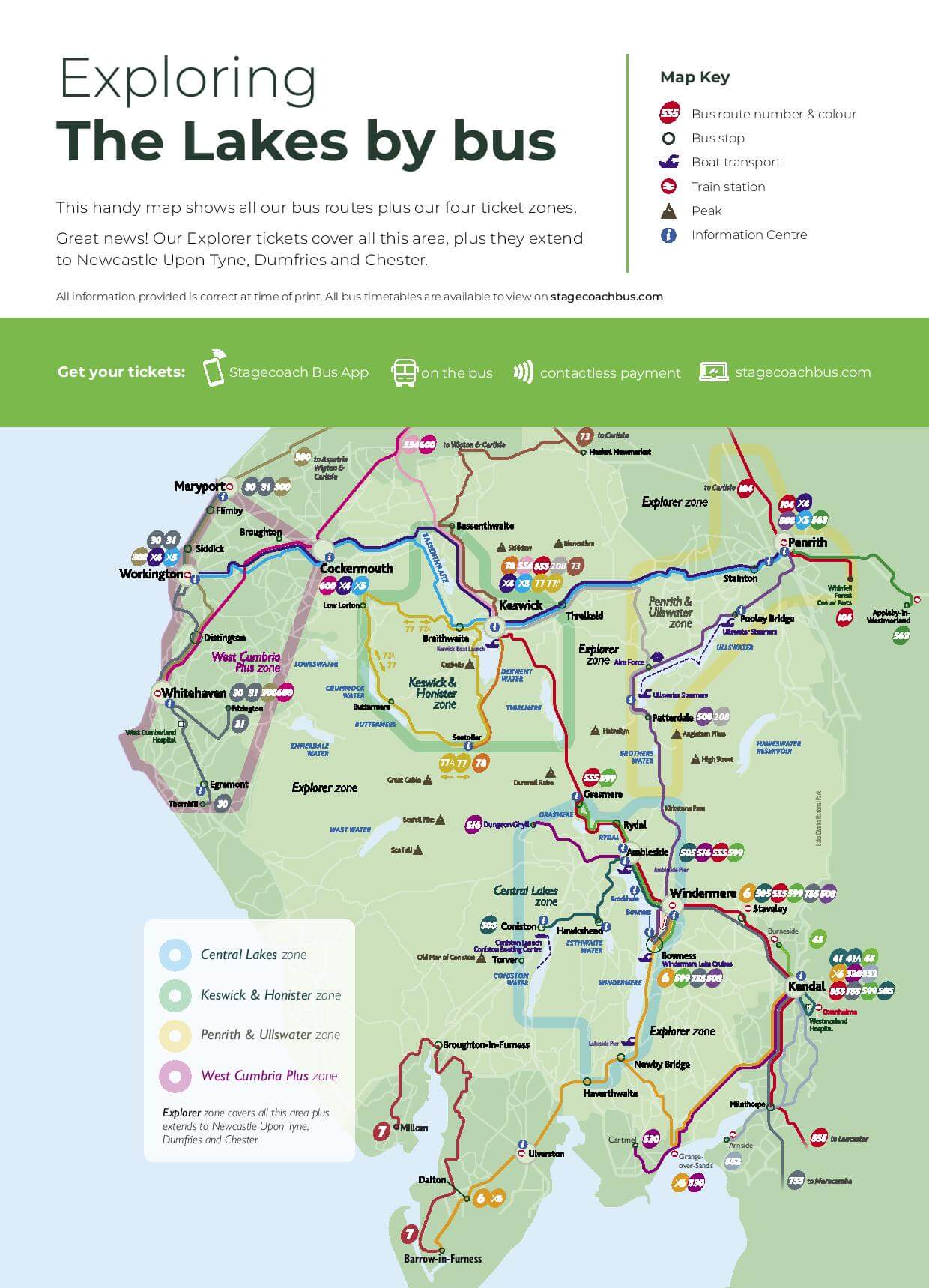 In addition to the public bus services, there are also a variety of private companies offering minibus tours to key beauty spots and tourist attractions. Ideal if you’d prefer someone else to do the organising for you.

If you’re looking to beat the rush then try to travel earlier on in the day, this will give you a chance to get to the main spots and enjoy them in peace and quiet before the crowds catch up.

Seeing as the Lake District is renowned for its beautiful lakes, it makes sense to explore the area by boat. With a vast array of steamer and boat cruises you can take from the towns of Windermere, Ullswater, Coniston and Derwentwater, taking to the water just couldn’t be easier. Windermere Lake Cruises are actually the most popular attractions in all of Cumbria and are a fantastic day out for individuals and groups alike.

If you fancy stretching your legs, then why not combine a one-way cruise with a walk or cycle back to the starting point. This way, you’ll end up exploring the beautiful scenery of the Lake District by both water and land in just one day.

If walking or cycling just isn’t for you, then the Cross Lakes Experience is a great option. Sail across Lake Windermere, before hopping aboard a Mountain Goat bus and continuing your journey on wheels, this is the ultimate car-free day trip.

Whichever mode of transport you choose, ditching the car and exploring the Lake District by public transport or foot is a fun, environmentally-friendly and cost-effective way to discover one of the UK’s loveliest areas. 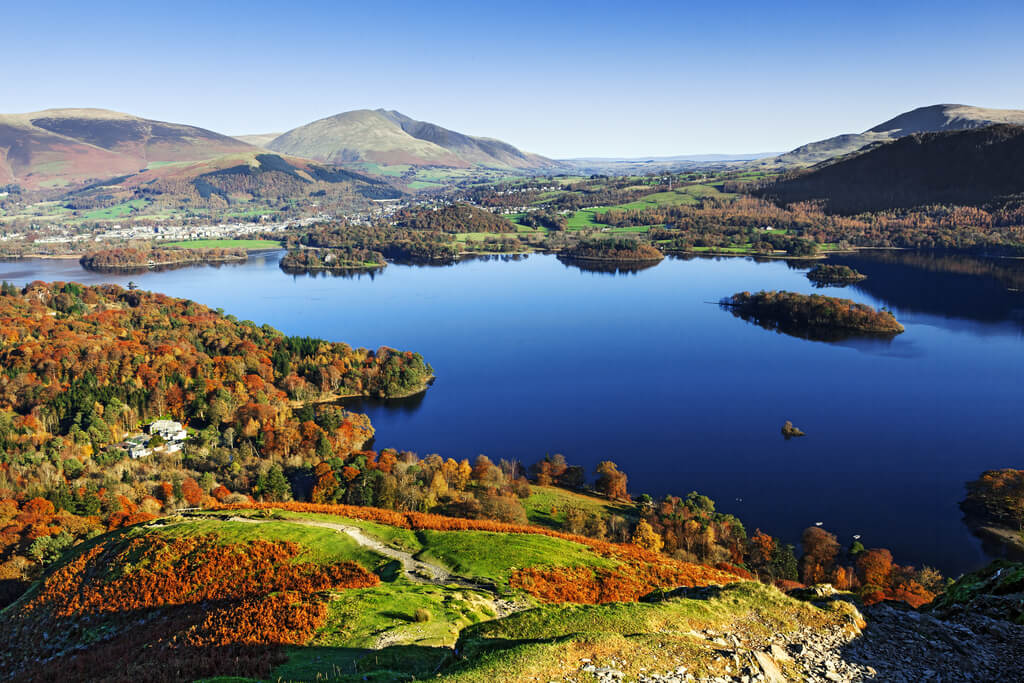 Below we’ve listed towns to stay in the Lake District for when you arrive. These are all accessible via Stagecoach’s extensive network of buses throughout the area.

North of the Esthwaite waters, Hawkshead is a small but perfectly formed Cumbrian village, ideal for exploring some of the best lakes and mountains in England.

Located on the edge of Lake Derwentwater, the lively market town of Keswick has loads of attractions and year-long around events for all ages.

Considered the cutest village in the Lake District, Grasmere is also rich in history. Many of the beautiful grey stone buildings are centuries old and the church dates as far back as the 13th century.

At the heart of the Lake District, Bowness-on-Windermere is packed with local shops and cafes serving delicious ice creams and is the perfect spot for enjoying sailing and watersports.

On the north side of Lake Windermere lies the idyllic village of Ambleside. Quieter than its Southern neighbour, it nevertheless offers a unique array of sights and is a good base for those without cars looking to explore the lake and mountains.

Coniston is in the Southern part of the National Park and a firm favourite of walkers and climbers, who come to enjoy the surrounding beauty of the Furness Fells and Dow Crag.

Cartmel is a hidden gem close to the River Eea and not far from the coastal town of Grange-over-Sands. Just outside the National Park, the village still has a host of interesting sights to explore and is as picturesque as any of its larger neighbours.

Hi, I'm Liz, a self-confessed travel addict, outdoors enthusiast and food lover. When I'm not scoping out the very best spots for your next UK getaway, you'll be able to find me out and about exploring the local countryside or else tucking into something tasty (because food is second only to travel).